The origins of CRU lie in an initiative of the parent advocacy organisation, Queensland Parents of People with a Disability (QPPD). In its role as a catalyst for improving services for people with disabilities and their families, QPPD, in alliance with some committed professionals, organised the Search Workshop.

Held in October 1987, this gathering of 90 people involved people with disability, parents, service providers and government representatives from all over Queensland, coming together to develop a shared vision for Queensland.

One of the initiatives to come from this three-day gathering was a task force which developed a strategy for supporting, informing and providing training opportunities for people with disabilities, their families, workers and organisations. CRU is a result of that work. Initially sponsored by QPPD, CRU subsequently became incorporated in October 1988.

CRU adopted a theory of change, which emphasized a change of heart as well as changes to the structures that limit and oppress people with disabilities.
Anne Cross and Margaret Ward.

Click here to read Community Resource Unit: A Decade of Investment in Values, Vision and Grassroots Development (PDF). Written by Margaret Ward and Anne Cross. From the CRU publication Gathering the Wisdom which is no longer in print. 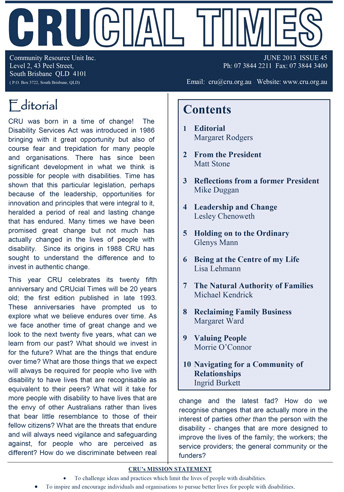 Since its first edition was published in 1994, CRUcial Times has provided a platform for local, national and international writers to explore a variety of themes around authentic inclusion for people with disability and what genuine change needs to happen for this to occur.

The intention of CRUcial Times is to share the wisdom of stories, ideas and strategies and to speak from the truth of the person who is writing the article.  We have found this truth has a relevance that transcends time and place and as such is not dependent on a specific person, organisation or funding stream.

CRUcial Times also holds some important history of CRU and the many people who have contributed to our work over the years.

Two editions of note are:

Contributors to the work of CRU

We often talk as though CRU is the small group of people, employed in an office in Brisbane.  That resource has been an important cog in the wheel and over the years has played an important role in stimulating change.  However CRU is more than the staff and board members and our ambitious vision for change won’t be achieved by that little group alone.

The work of CRU has been built and strengthened by people who have shared their ideas, insights and learnings through presenting, writing, telling their story at a CRU event or sharing a conversation over a cup of tea.

Click the image below to open a gallery of the people who have contributed to CRU and its work over the decades.

In October 2012 CRU hosted a dinner for 150 people at the Novotel Hotel to celebrate the 25th Anniversary of the Search Conference. We wanted to remember our history and to celebrate the importance of visionary leadership, people power, dreaming big, collaboration over time and staying faithful to a vision.

REMINDER : Join us now! Registrations for CRU’s workshop are closing soon.Connecting with Community: Starting to Talk about Belonging is a one-day workshop for people with disability, their families, friends & supporters, on Thursday 2nd June at Seville Mercy Conference Centre. Presented by CRU Consultant Jo Walters, Jo says of the workshop: “For me belonging is a sense of connection, a feeling of being seen, & of being understood. It might not be easy to do but there are deliberate steps & strategies that we can take to help us on this path.”Don’t miss out! Register now at https://events.humanitix.com/cairns-cwc-stabl-jun22Image Description: Jo, Catherine & Diana holding mugs and smiling and laughing at the CRU office. Image Caption: “Presenter Jo Walters (left) feels like she belongs at work”Image Text: LAST CHANCE. Connecting with Community: Starting to talk about belonging. Cairns Thursday 2nd June 2022 ... View more about this articleView less about this article

Are you a family member of a secondary student with disability, worried they will be disadvantaged by typical job seeking & recruitment processes?Learn how a Customised Employment approach can help create employment & self-employment opportunities for a young person with disability in this brand NEW webinar series presented by CRU. Each webinar focuses on a different phase of the Customised Employment approach:1. Discovering the person – Thursday 2 June 20222. Creating Job Opportunities – Thursday 9 June 20223. Finding Job Support Staff – Thursday 16 June 20224. Setting up for Success – Thursday 23 June 2022(All webinars run from 12noon - 1.30pm)It is recommended participants attend all sessions live if possible. Sessions will be recorded and replays available for a limited time.Register here: https://events.humanitix.com/customised-employment-s2w-webinar-series-jun22The webinars will include relevant state-based information related to employment.Not based in QLD? Find out more in your local StateNSW: Resourcing Inclusive Communities: https://www.ric.org.auACT: Imagine More: https://imaginemore.org.auAbout CRU:For over 30 years, Community Resource Unit has been working across Queensland to help people with disability take control of their lives and take their place in their community. ... View more about this articleView less about this article

It is a common hope of parents that their children will make friends at school, & will see themselves as valued & contributing members of their school community. Parents of children with disability can worry these things won't come easily for their family member. CRU focuses specifically on the topic of ‘Building Friendships and School Belonging for your Child’ in the short workshop coming to Mount Gravatt on Friday 27 May. This is an opportunity for parents to learn that friendship is indeed possible & important for all children, and that there are ways to create opportunities for friendships to develop. Participants will explore strategies that families have used to intentionally nurture their child’s role in the school community, and their connections with peers.Register now at https://events.humanitix.com/brisbane-south-building-friendship-and-school-belonging-for-your-child-…Image text: Families for Inclusive Education. Friday 27th May, 2022. Mount Gravatt Bowls Club. Brisbane South. 9:30am-12:30pm. Building Friendship and School Belonging for Your Child. Community Resources Unit Ltd. Proudly supported by the Queensland Government through the Department of Education. ... View more about this articleView less about this article